So I tried to create a meaningful or quirky opener to this review. The fact is, I failed. However, I’m here to say that I really dug The Invitation and Sony Pictures really dropped the ball on the marketing for this incredible homage to the horror of the past. Read on to find out why I enjoyed this film as much as I did.

In The Invitation, “after the death of her mother and having no other known relatives, Evie takes a DNA test…and discovers a long-lost cousin she never knew she had. Invited by her newfound family to a lavish wedding in the English countryside, she’s at first seduced by the sexy aristocrat host but is soon thrust into a nightmare of survival as she uncovers twisted secrets in her family’s history and the unsettling intentions behind their sinful generosity.”

Rarely do we get films that feel like the classics. The remakes modernize them to the point of making them nearly unrecognizable. The Invitation changes that. It feels like a mix of Universal and Hammer Horror films with modern sensibilities. Everything from the larger-than-life sets to the score just screams gothic horror. The use of elements from Dracula adds to the feeling of similarity between this and old black and white horror. 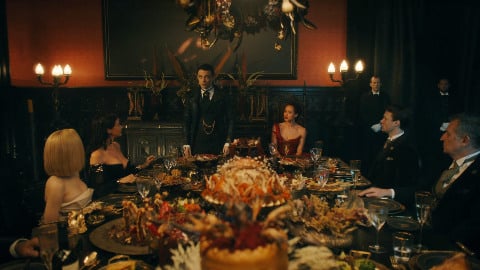 Everything about The Invitation’s visuals feels lush. The setting is breathtaking and even scenes that aren’t in sprawling locations have so much to look at and keep the viewer engaged. I am super biased about this, but the feast scene during the third act feels absolutely decadent. I challenge any viewer to not want to be a part of that meal.

The cast in The Invitation was definitely well cast. I will admit that I giggled seeing Sean Pertwee play the butler Mr. Fields given his role as Alfred in Fox’s Gotham. I loved Nathalie Emmanuel in a lead role as opposed to being part of a larger ensemble cast as she was in Game of Thrones or The Fast and the Furious franchise. She really stands out in a film where it would be easy for a lesser actress to get lost. I couldn’t believe that Thomas Doherty’s claim to fame prior to this was Disney’s Descendents series. I would watch him as a gothic heart throb any day of the week. His performance almost reminded me of the charm that Sebastian Stan had in Fresh.

It is also worth mentioning that Dara Taylor’s score for The Invitation is sheer perfection. Like horror from the days of yore, it is haunting and enhances every aspect of the film. I definitely will be adding it to my horror movie playlist! Screen Rant actually did an interview with Dara Taylor that is really interesting and worth checking out if you’re into that kind of thing.

Overall, I think this movie deserved way more push than it received. If you get the opportunity and feel safe doing so, go to the theater and support this film. The Invitation is now showing. Are you a fan of gothic horror? Let me know your favorites of this sub-genre in the comments below.