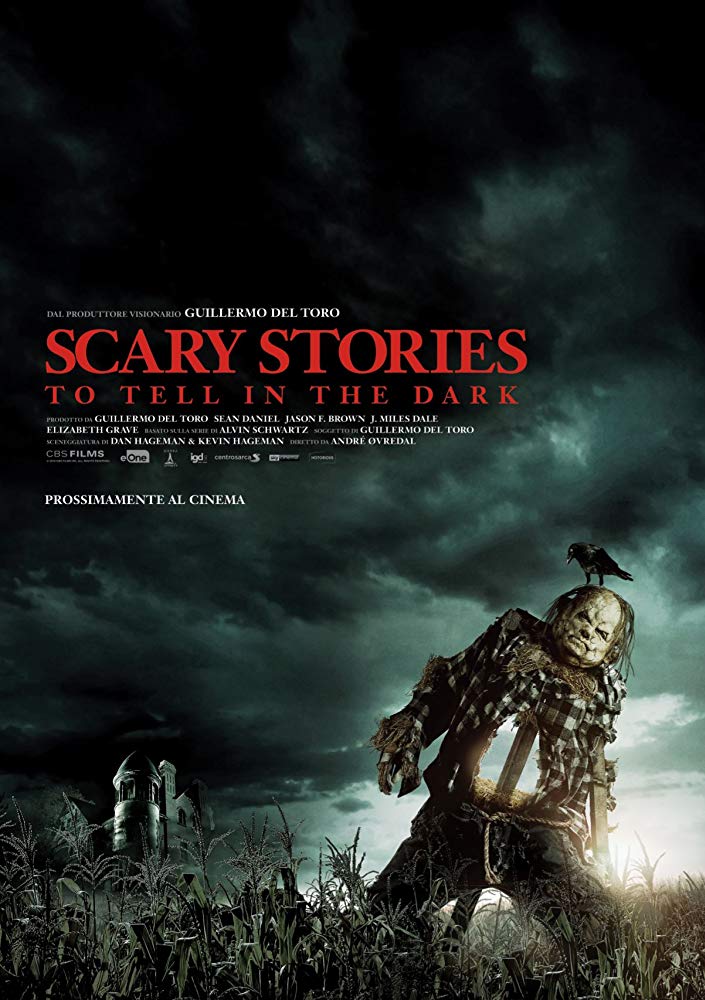 For horror fans my age, Scary Stories to Tell in the Dark and its sequels were more than likely your gateway into horror. So when it was announced that Guillermo del Toro was producing a movie inspired by the series I pretty much lost my mind. I wondered what stories they would use. Would my favorites be there? Would I love it in the same way that I loved the books? Now that I’ve seen it, I can answer that for you. Some of my favorites are there, but do I love it as much as the books? Not so much, but that doesn’t mean it was bad either.

In Scary Stories to Tell in the Dark, “It’s 1968 in America. Change is blowing in the wind…but seemingly far removed from the unrest in the cities is the small town of Mill Valley where for generations, the shadow of the Bellows family has loomed large. It is in their mansion on the edge of town that Sarah, a young girl with horrible secrets, turned her tortured life into a series of scary stories, written in a book that has transcended time—stories that have a way of becoming all too real for a group of teenagers who discover Sarah’s terrifying home.”

There are several things to unpack in terms of Scary Stories’ story. On the surface, you have a horror film that is clearly meant for a younger audience. I think not understanding that going in does a disservice to the audience. Several articles have mentioned that this was the intention of the film. Now, this doesn’t mean it is a Goosebumps type movie where it is a goofy film with horror undertones. On the contrary, it is a horror film that is somewhat more family-friendly for families with older children.

With Guillermo del Toro’s involvement, it should come as no surprise that there are social issues addressed within the film. Racism, women’s issues, and America’s militarism are all present. However, much like other films, GDT is involved with, the topics aren’t beat into you. They fit within the story as opposed to being shoehorned in. Not only that, but they are as relevant today as in the film’s 1968 setting.

André Øvredal’s presence can be felt in the general feel of the movie. Fans of Autopsy of Jane Doe will recognize the use of color to build dread. Scary Stories has two primary color palates, red and green. This definitely adds to the creepiness of the film. There are some really great moments that even made me jump!

I really enjoyed the references to the source material. I counted at least 13 mentions or references to stories in the original book. Though to be fair a few are from the other 2 books and not Scary Stories to Tell in the Dark. The best use of the source material, in my opinion, was the use of Harold or The Big Toe. Both scenes were horrific in their own way. The Red Spot was also really effective. I also really liked that they used a sort of watercolor look to represent Sarah Bellows’ spirit. It was a great throwback to the art style in the book. The big downer for me was The Jangly Man. From what I can tell The Jangly Man is sort of a cross between the stories Me Tie Dough-ty Walker and Aaron Kelly’s Bones. I feel as though they relied on him too much which made him less scary. I think a flashback scene for The Wendigo would have been really cool. It is one of the best stories in the first book and it was a missed opportunity to not include it more.

The casting was really well done for the movie. Having tried to keep myself in the dark (pun intended) for this film, I didn’t realize that Dean Norris (Breaking Bad) and Lorraine Toussaint (Orange is the New Black and She-Ra) had small roles in the movie. The supporting cast in this movie was as good as the main cast and equally as memorable. Zoe Margaret Colletti’s Stella was someone I would have idolized at 10-13 years old and I would venture to say that Stella will definitely be a hero to any kid (or even adult) who has felt different and unheard.

Overall, I really enjoyed the movie. Is it perfect? No, but again, it doesn’t need to be. It is still a lot of fun and delivers some fantastic scares. I think it will be a great movie to watch again around Halloween. I really hope they do 2 more movies (like the books) and explain more lore and back story of Sarah Bellows’ book. I think that would actually help this movie as well. Scary Stories to Tell in the Dark is in theaters on August 9th.