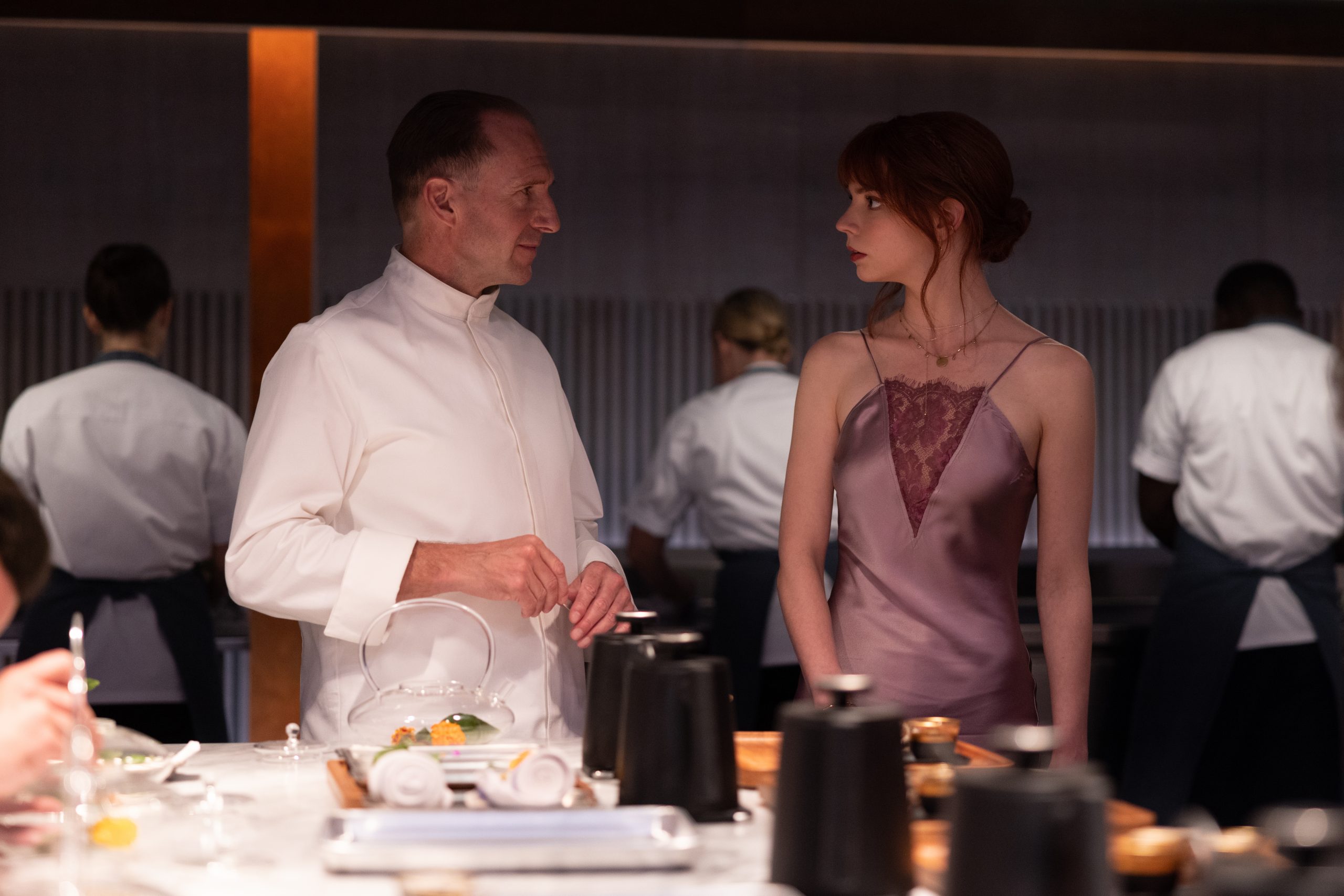 If you have been a reader, fan, or friend of mine, you know that gastro horror is pretty much my brand. I will watch anything and everything that involves food and horror. When I heard about The Menu, I was absolutely beside myself. How could I get so lucky to be given this veritable feast (pun intended) of gastro horror this year? Did The Menu live up to my extremely high expectations? It did! In fact, it exceeded them and delivered absolute perfection.

In The Menu, “A couple (Anya Taylor-Joy and Nicholas Hoult) travels to a coastal island to eat at an exclusive restaurant where the chef (Ralph Fiennes) has prepared a lavish menu, with some shocking surprises.”

Normally, when I review a film I talk about the good, the bad, and the ugly. However, in terms of The Menu, I only have good things to say. I’ll start with the story. I kept myself in the dark while waiting for this movie because I didn’t want to know anything and I am glad I did. The writing in this film is sheer brilliance. Not only is it funny (but not distractingly so), but it is also loaded with social commentary. During a recent press conference that I attended, actor John Leguizamo discussed this.

Yeah, I love the political and social commentary of this film because I feel like it’s tapping into something that’s happening, especially in America, maybe across the world as well. The disappearing middle class, and these billionaires who think they can control our democracies, control our social platforms, control us, and how they separate us and keep us out and go into their little special bubbles. I think it’s a great commentary on the privilege that’s happening in America, and entitlement and people creating an ‘us vs. them’.”

In addition to the fantastic writing, the cast also improvised a lot of the conversations in the group shots since they didn’t know where the camera would necessarily be. Director Mark Mylod had this to say:

We were all on set together pretty much every day, and never quite knowing entirely where the camera was going to be some of the times. Particularly in those group scenes. And the way that you all improvised and just keeping those secondary and tertiary layers of the conversation going through the group shots and beyond our scripted dialogue. The insights that gave us all into extra dimensions of the character.”

Speaking of the cast, the entire ensemble is exceptional. Ralph Fiennes and Anya Taylor-Joy’s bizarre dance feels like you’re watching 2 exceptionally talented people tango. There is an intensity between them that couldn’t be matched. Hong Chau also stands out as the restaurant manager. She was so spot on in her role that Michelin Star Chef Dominque Crenn (who was on set as a consultant) said, “I love what you’re doing. I think it’s spot on and I want you to come and work for me.” The rest of the group made up of veteran actors like Judith Light, Reed Birney, and John Leguizamo as well as Nicholas Hoult and Aimee Carrero were absolutely outstanding. It was hard not to be sucked into the film with all of that talent. 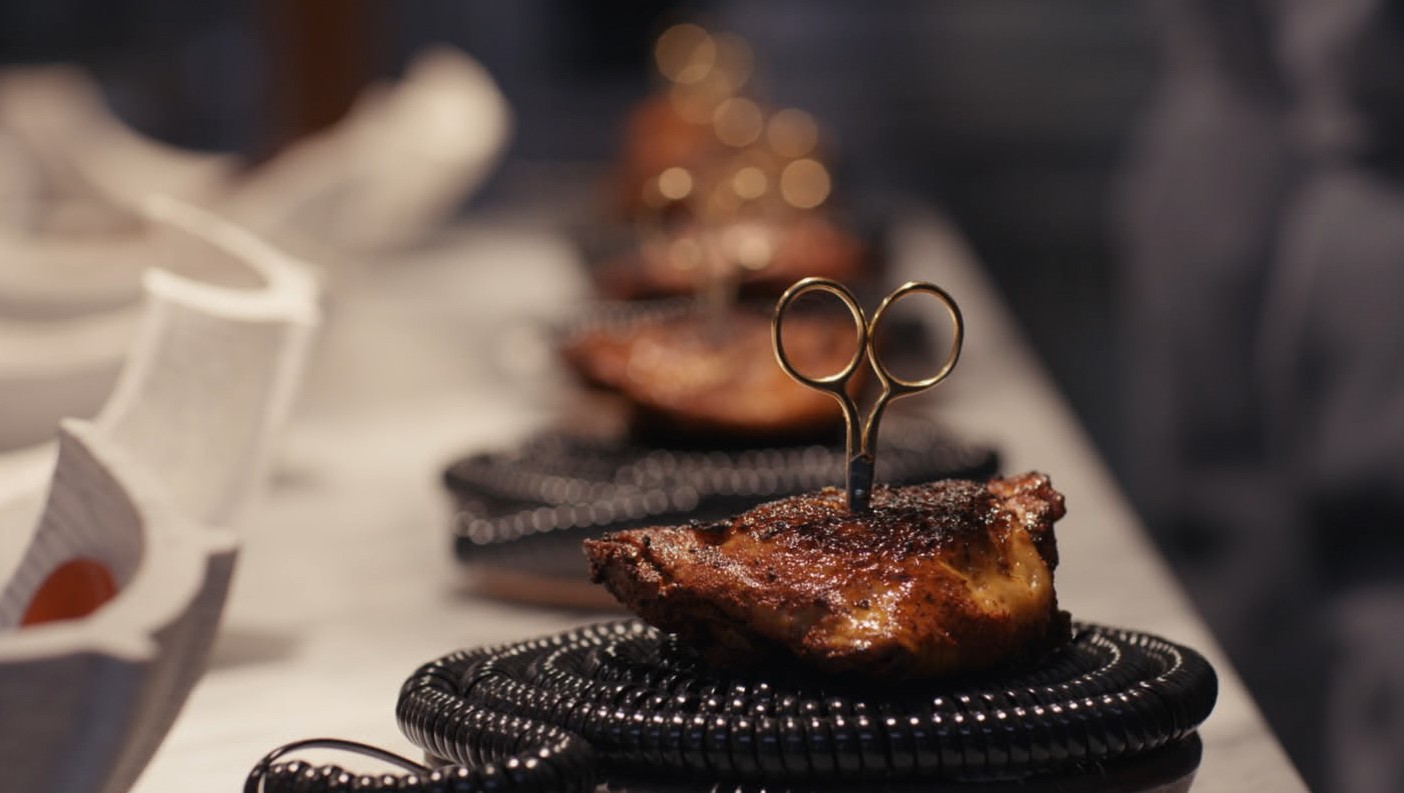 So you’re probably curious as to how the food looked so good on screen. I’ve got the scoop for you. For starters, as I mentioned Chef Dominque Crenn was on set as a consultant but in terms of photography, the 2nd unit director was Chloe Weaver. Weaver was the second unit director of photography of Chef’s Table and even won a James Beard Award for Technical and Visual Excellence in 2020. So obviously, the talent extends past Hollywood in the culinary world as well.

Overall, this film easily ties with Fresh (another Searchlight Pictures gastro horror release) as my favorite film of the year. I could go on and on about the movie but I do want to keep this spoiler free. If you want all my thoughts including a pretty major hot take, go check out the Final Girls Feast episode where Carrie and I chat about the film. The Menu is now out in theaters. I strongly recommend you go check it out!